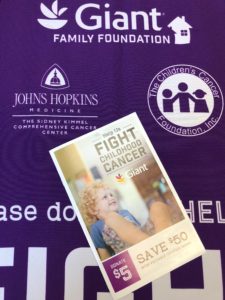 This year, Giant Food set a goal of raising $2M and within an unprecedented six week period, surpassed that goal! Customer donations were made largely through the sale of $5 coupon books valued at $50.00. The coupon books feature Giant’s ambassadors and hospital partners, helping to put local faces and organizations to the effort. Giant Food customers brought the total amount raised to $2,076,816.

Meet some of this year’s heroes in the campaign kickoff video.

Giant Food customers can purchase a $5 coupon book (valued at $50), round up their total purchase at check-out or purchase a bouquet of flowers ($.50 of the proceeds will contribute to the campaign).

Giant Food hosted its campaign kick-off on July 17 at Giant Headquarters in Landover, MD. Emcee Dave Johnson, of WTOP Radio and the voice of the Washington Wizards, introduced the 2018 Ambassadors and their families, and recognized Giant Food stores that led the fundraising effort in 2017. 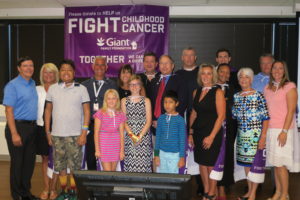 Representatives from CCF, Johns Hopkins, and Giant Food pose with Dave Johnson (center) and the 2018 Ambassadors and their families at the kickoff event.

Since 2013, Giant Food additionally supports CCF’s mission to invest in pediatric cancer research by funding a CCF Giant Food NextGen Research Award which supports area researchers that are just starting their career in pediatric oncology. This year, the Next Gen Award will be supporting Micah Maxwell, M.D., Ph.D., of Johns Hopkins Medicine.

CCF is grateful to Board member Terry McGowan, Director of Food Safety and Quality Assurance at Giant Food, and to Giant Food Team for their loyal and generous support.