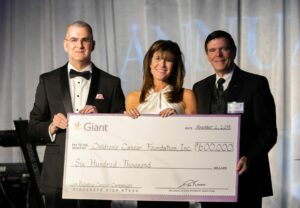 UPDATE: 11.2.19 – Through Giant Food’s 2019 campaign, shoppers raised over $2 million in less than two months to “Fight Childhood Cancer.” On November 2, 2019, at the 35th Annual CCF Gala, Terry McGowan, Director of Quality Assurance, Giant Food Landover, and CCF Secretary, presented CCF with a check for $600,000. CCF is incredibly grateful to Giant Food, as they continue to be the longest and most significant donor for CCF since its founding in 1983.

Giant Food customers can purchase a $5 coupon book (valued at $30), purchase a wristband for $3, round up their total purchase at check-out or purchase a special bouquet of flowers, all of which support its pediatric cancer campaign.

Giant Food hosted its campaign kick-off on July 11 at Giant Headquarters in Landover, MD. Emcee Dave Johnson, of WTOP Radio and the voice of the Washington Wizards and D.C. United, introduced the 2019 Ambassadors and their families. CCF Giant Food Ambassador, Logan Johnson, of Baltimore, MD, attended with her twin sister, Raegan, and her mother, Mia. 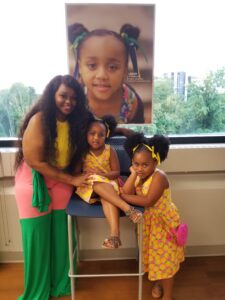 Logan can be found on the cover of the 2019 coupon book and more info about Logan is available on her story page.

CCF is grateful to Board member Terry McGowan, Director of Food Safety and Quality Assurance at Giant Food, and to the entire Giant Food Team for their loyal and generous support.