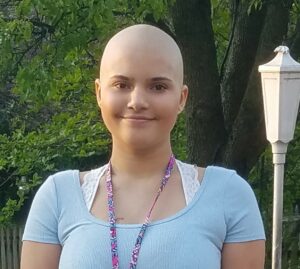 At the start of 2019, Danielle Hankey was an active high school sophomore playing winter league field hockey and competing for the high school swim team in Frederick, MD. On February 15, Danielle’s elbow became very painful and she was unable to extend her arm. Danielle’s mom, Wendy, took Danielle to the local hospital, but Danielle’s pediatrician, Dr. Nandini Thillairajah, felt the initial diagnosis was incorrect and advised Wendy to take Danielle to Children’s National Medical Center in Washington, D.C.

Diagnosis – The team at Children’s identified a mass on Danielle’s elbow and admitted her. She endured a two and a half hour MRI that night to get a better visualization of the mass on her elbow. The biopsy taken during surgery confirmed the tumor was cancer, but unspecified. After a few weeks, the cancerous tumor on her elbow was identified as Ewing Sarcoma, a very rare type of cancer where tumors grow either within bones or the soft tissue around bones and usually affects adolescents and young adults. A long intense regimen of chemotherapy began immediately after diagnosis. After 12 weeks of chemotherapy, including long commutes from Frederick to D.C., Danielle learned that her cancer was not responding to the treatment as well as the doctors anticipated, so they added radiation to the protocol.

Circle of support – While treatment was brutal on her body, Danielle kept her spirits high by staying connected to her field hockey teammates over the summer, cheering them on during summer league. Danielle was able to participate her junior year as team manager for varsity field hockey. She is hoping her graft is healed enough to participate as a varsity hockey player her senior year. Her coaches and the field hockey community have been an incredible source of support. They visit her often and have held fundraisers to help relieve the family’s financial burden. Danielle is supported by her incredible family. In addition to Wendy, Danielle’s father, Kurt, and siblings Steven and Allison, play crucial roles in Danielle’s treatment and recovery.

Next battle – On September 3rd, 2019– the first day of school– Danielle underwent another surgery to remove the tumor and a portion of her ulna. They grafted a cadaver bone that will hopefully heal in a year. The surgery was very long and intense, lasting twelve hours. The cancer was still alive and present after eight rounds of chemotherapy and 21 days of radiation treatment. However, they were able to remove it all with clear margins. Danielle started back on her chemotherapy regimen in October is finished her chemotherapy at the beginning of February and had clean scans at the end of February 2020 and, most recently, July 2020. She was declared cancer free.

Cancer Returns – The scans at the end of 2020 dashed their hopes when doctors discovered a mass on her left lung. Surgery confirmed that the Ewing Sarcoma had metastasized. As of February 2021, Danielle resumed chemo but is again determined to beat cancer a second time!

Danielle has received so much love and support from her sports community, friends, family, the local community, and neighbors. This has truly helped her and her family get through these tremendously difficult years. Updates can be found on a page created by a loving friend –  Danielle’s Go Fund Me page. 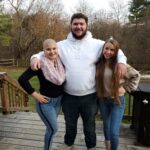 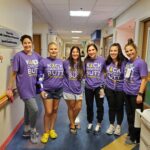 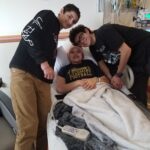 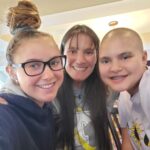 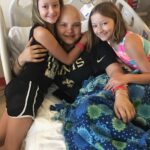 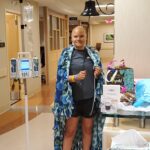