“I was just an average girl

leading a normal life,” recalls Eileen Fauteux as she remembers the events that led to her cancer diagnosis. Eileen was a 20-year-old Junior at Virginia Tech when she suddenly began to experience extreme back pain in November 2015. Two ER visits later, she was sent home with heavy pain medications to help her recover from assumed bronchitis. However, the pain continued to worsen. Eileen then began feeling numbness and tingling in her legs and toes and walking became extremely painful and difficult.

On November 19th, an MRI revealed a mass on her spine that was compressing nerves, causing the numbness and difficulty walking. She was rushed to a local medical center to undergo emergency spinal surgery. Doctors found a tumor along four of her vertebrae that was compressing her spinal cord. Three and a half hours later, the tumor was successfully removed and sent for testing. Two weeks after Eileen’s surgery, she was diagnosed with Ewing’s Sarcoma, a rare pediatric cancer that typically forms in the bone or soft tissue in adolescents and young adults.

Eileen began researching Ewing Sarcoma and immediately contacted Jeff Toretsky, M.D. at Georgetown Lombardi Comprehensive Cancer Center. Dr. Toretsky was instrumental in organizing a consortium of oncologists in the greater Washington-Baltimore area to provide guidance on the best treatment for Eileen. The researchers and oncologists on Eileen’s team all had one thing in common: all of their institutions received funding from CCF to advance research. 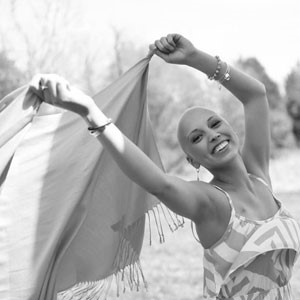 An aggressive nine-month chemotherapy and radiation regimen was prescribed. One of the oncologists on ‘Team Eileen’ suggested that Eileen would be an ideal candidate for proton radiation. Given the location of the cancer and the many sensitive nerves and organs surrounding the spine, the precision of proton therapy would minimize damage to healthy tissue. Eileen was referred to Young Kwok, M.D., a radiation oncologist at the University of Maryland and associate professor of radiation oncology at the University of Maryland School of Medicine, where the Maryland Proton Treatment Center (MPTC) is located.

The Maryland Proton Treatment Center would open just in time for Eileen to be part of their first round of patients. Following proton treatment, Eileen returned home to finish her chemo treatment. She graduated from Virginia Tech in May, 2017 and is now pursuing a career as a Physician Assistant at the Philadelphia College of Osteopathic Medicine.

“I have always been interested in a career in medicine,” Eileen says. “I feel so lucky to be here, continuing my dream. After my experience, I know that every day is a blessing.”

She is now cancer-free. Eileen’s advice for other young adults fighting cancer is: “Stay positive – negativity is not an option!”

You can hear Eileen share her experience with the first Annual CCF Research Symposium in 2016, and see her in the 2016 CCF Video.