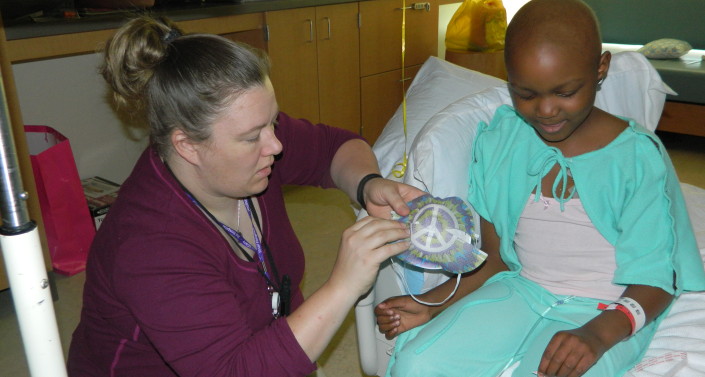 On Grace Callwood’s 7th birthday, she was taken to her pediatrician in Abingdon out of concern for an enlarged lymph node behind her ear. About a week later, her mom discovered a large tumor on her inner thigh. Within a week, Grace saw a pediatric surgeon. It was a Tuesday. By Thursday, Grace and her family received a second opinion at Sinai Hospital. The chief of pediatric surgery strongly recommended Grace for immediate surgery to test the lump tissues. Grace underwent surgery on that Friday. Cancer was detected in her lymph nodes and in her bone marrow. The following Monday, October 10, 2011, Grace was diagnosed with Stage IV Non-Hodgkins Lymphoma.

The staff at Sinai were confident they would “melt this cancer.” And they did.

Grace completed chemotherapy in April 2014, and is a healthy, vibrant and giving young woman. Sinai Hospital has remained vital to Grace’s family.

“Pediatric Oncologists Joseph Wiley, Jason Fixler and Yoram Unguru are the best triple threat …against cancer there is,” according to T’Jae Ellis, Grace’s mom. “They are proficient and at the top of their fields, and they serve the medical profession with integrity.”

Equally as important to T’Jae, was that each doctor treating Grace was able to balance their care for the innocence of their young patients while still validating that even the youngest among them has a voice in their medical treatment. They exhibited true partnership with parents; careful to be prescriptive in medicine, but not in parenting.

The pediatric oncologists and the entire medical staff within Sinai’s pediatric medical unit created an atmosphere that, for Grace, was better than a “home away from home.” That’s what she loved about the Children’s Hospital; it offered comfort, distraction, a nurturing environment and activities. She looked forward to staying in the spacious, well-designed rooms and playing in the playroom.

Through her pediatric cancer journey, Grace founded and helps run the youth-led charity We Cancerve Movement. She deliberately plays on the word cancer signaling a conscious choice to provide service to others from her own painful experience.

Today, Grace is in high school in Harford County. Grace, and her mother T’Jae Ellis, offered their heartbreaking and inspiring story for the 2019 CCF Video. CCF was delighted that Grace and her mom were also able to join us for the 2019 CCF Gala, where Grace surprised CCF with her nonprofit’s own donation to CCF.

In October 2020, Grace was named in The Baltimore Sun’s 25 Women to Watch list.

Survivor Grace Callwood surprises CCF with a donation from her own non-profit.