On June 6, 2016, when Madelyn Smith was 4 years old, she was diagnosed with an extremely rare, hard-to-diagnose cancer. At the time, the tumor did not match any type of cancer seen at three separate institutions. It most closely resembled Ewing sarcoma, but was considered to be undifferentiated. Three months into her treatment at Johns Hopkins, right before her resection surgery to remove what was left of the tumor in her back, it was found that Madelyn did not have an undifferentiated tumor or sarcoma at all, but an extrarenal rhabdoid tumor – one of the most aggressive and lethal malignancies in pediatric oncology. Madelyn had her resection surgery at Memorial-Sloan Kettering, where they removed 4 ribs and 4 transverse processes from her spine with most of her upper-right paraspinal muscles. She was able to receive intraoperative radiation directly on the tumor bed site immediately after the tumor was removed, cutting her post-surgery radiation time in half.

After surgery, Madelyn’s oncology team at Johns Hopkins had to come up with a new treatment plan. Currently, there is no protocol or roadmap to follow for extrarenal rhabdoid tumors – they are just that rare. Her oncologist collaborated with fellow pediatric oncologists from several different institutions all over the country to create a new treatment plan. Madelyn had 17 rounds of proton radiation followed by 4 more months of a new, stronger and more aggressive chemotherapy plan. Madelyn was declared cancer-free on February 2, 2017. However, in the months after the resection surgery Madelyn’s back started to curve significantly. The removal of the tumor left Madelyn with severe scoliosis. In less than a year after the resection surgery, she developed a 91-degree curve and her left lung was about to collapse. In October 2017, Madelyn had surgery to correct the scoliosis and 2 growth rods were placed in her back and the vertebrae in her neck were compressed.

As of Spring 2020, Madelyn is a strong, healthy 8-year-old standing straight and loving life! She loves playing with her little brother, Benjamin, and adores her baby sister, Emma. Madelyn is always drawing or painting something and she loves reading, swimming and playing outside. She is currently a Girl Scout and is taking tap dance lessons. Madelyn wants to be a teacher when she grows up so she doesn’t like school – she loves school – and is about to finish second grade.

Madelyn continues to see her oncologist every 4 months for scans to confirm that cancer has not returned.

In May, Madelyn and her family kindly opened their home to CCF to interview them to share their journey with us in a CCF video (above).

Pediatric oncology research played, and will continue to play, a vital role in ensuring pediatric oncologists are aware of all cancers and have the ability to find cures for the youngest patients. 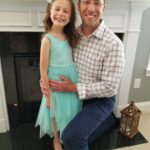 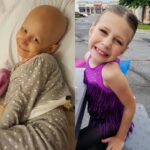 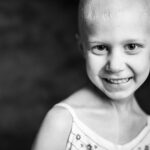 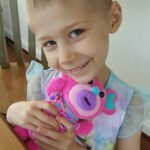 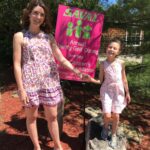 Madelyn and her mom enjoying the day. 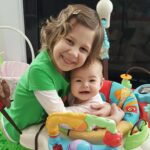