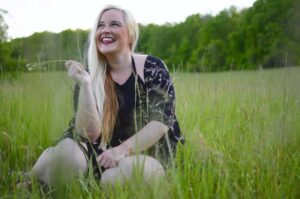 After nine months of symptoms, multiple doctor visits, CT scans, and hours of MRIs, 20-year-old Vanessa Bishop was finally diagnosed with medulloblastoma, a rare and aggressive tumor, in May 2016. Vanessa was a student at West Virginia University, majoring in Elementary Education, and this news was not in her plan.

The following month, Vanessa had surgery at Johns Hopkins to remove the tumor.  Her mother, Vicki, was by her side and her father, Jim Bishop, commuted almost daily from West Virginia to Baltimore to be with Vanessa while he worked full-time.  The surgery initially left Vanessa with the inability to walk or talk. She also experienced significant vision impairment and the inability to use her hands. She was essentially incapacitated. 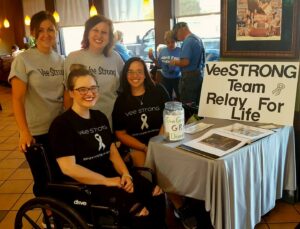 While the procedure was frightening enough, its side effects were far more severe than the family expected. Vanessa has had to relearn everything: how to walk, talk, and use her hands. She is still re-learning today. This is a “double whammy”, and a very “to be continued” process, but she has come a long way from not being able to feed herself to being more self-sufficient.

The tumor returned for a second time at the beginning of 2017. Vanessa was eager to avoid chemotherapy and general radiation therapy and elected to travel to Mexico seeking alternative cancer treatments. During this time, Vanessa received CyberKnife radiation, and sought out seemingly every single alternative treatment possible. 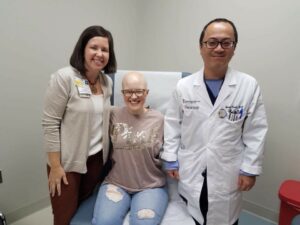 Nurse Kat and Dr. Kwok of the Maryland Proton Treatment Center with Vanessa

When her very aggressive, pediatric malignant brain tumor came back for the third time, she realized that traditional treatments were, quite literally, a “do or die” thing. Vanessa received proton radiation therapy treatment at the Maryland Proton Treatment Center to reduce the remaining portion of the tumor. Proton therapy is more targeted and specific than traditional radiation, thereby reducing the risk of damaging surrounding organs. At the Proton Treatment Center, Vanessa worked with Young Kwok, M.D. and Kat Steacey, CRNP. These proton radiation treatments put Vanessa in remission for a third time.

As of October 2020, Vanessa is 25 and has completed her degree from West Virginia University. She is living in the Hedgesville/Martinsburg area of West Virginia and keeping incredibly busy. In addition to writing a book, she plans to continue skydiving, become a motivational speaker, work for The American Cancer Society, develop an app that rates the accessibility of public handicap bathrooms, create workout videos for the disabled and those that need more assistance, just to name a few of her plans. She says, “It’s crazy how certain situations can change your goals and perspectives.” Vanessa is currently volunteering in Relay For Life, where she is a subcommittee member of the Youth Leadership Team. Vanessa also donates care packages for the patients on the oncology floor of her local hospital for those receiving chemotherapy. She has a YouTube channel that will hopefully kickstart her motivational speaking plans and help others. Vanessa’s positive spirit is inspirational.

On June 18, 2019, Vanessa celebrated the one year anniversary of her most recent remission, and the summer marked three years since her brain surgery, four years since symptoms started, and August 2nd was her 24th birthday.

Vanessa continues to be surrounded by a loving family– sisters, a younger brother and an extended support system– to assist her parents, who provide her round-the-clock care. Vanessa has found that prayer and positivity can make all the difference. “It’s been the longest, slowest, and hardest process of my life, but if God was finished with me, I wouldn’t be here. Period.”

CCF was honored to have Vanessa speak at the  4th Annual CCF Research Symposium on June 5, to share her story, which can be viewed on the CCF YouTube channel.