“One in a billion odds” 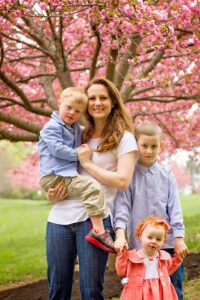 Kaitlin and Major Josh Erkkila met and married at Texas A&M University. Josh joined the Army in 2006 and had his first deployment in 2009. Like many military families, they had two children two years apart between deployments.
Their first son Jonathan was born at the military hospital at Fort Benning, Georgia in 2011. Like most military kids, his training to be resilient started immediately. Birth complications caused some early trauma and developmental delays, eventually leading to a diagnosis of Autism Spectrum Disorder.

In 2012, while living at Fort Bragg in North Carolina, the Erkkilas found out another son was on the way. This son, William “the Conqueror,” was diagnosed with Down Syndrome prenatally. Josh returned home from deployment early, arriving at the airport as Kaitlin was in labor.

William thrived during his first year, but then lost weight, regressed, and became ill. Over the next year, he visited many specialists, but with no diagnosis. All of his symptoms were misdiagnosed as being related to Down Syndrome. Finally, a blood and bone marrow test revealed Acute Myeloid Leukemia, and began the commute to the hospital at UNC Chapel Hill. Interestingly, they learned that children with Down Syndrome survive leukemia at over a 90% rate with a shorter chemotherapy regimen than typical pediatric patients. However, during his last month of treatment, William was exposed to RSV and C Diff in the hospital and nearly died of infection.

A week after William’s treatment concluded, the family moved to Fort Meade, MD, where William continued treatments at Johns Hopkins for another year under the care of Patrick Brown, M.D.
William is currently in remission. However, he lives with a host of complications as a result of chemotherapy and its many latent affects.

While William had a myriad of hospital appointments for his leukemia and Down Syndrome, Jonathan was along for the ride in the double stroller, making him comfortable at Johns Hopkins. Through all of these treatments, Josh remained active duty and was frequently gone for extended deployments. Kaitlin relied on a team of supportive family and friends to help.

In 2016, a year after completing treatment for William, the family was transferred to Kansas. The family moved back to the Baltimore area just in time for school and another deployment to Iraq to begin.

By this time, Kaitlin was six months pregnant with their first daughter. On the morning of September 21, Jonathan complained of a headache and immediately collapsed. Within the hour, Jonathan was at Howard County General Hospital, where a CT scan showed bleeding in the brain. Despite poor odds of survival, Jonathan was flown to Johns Hopkins and scheduled for surgery to remove a malignant brain tumor the following week. Jonathan endured a year of chemotherapy at Hopkins. Under the care of Jeffrey Rubens, M.D., it was suggested that he seek therapy at Maryland Proton Treatment Center. Young Kwok, M.D. managed Jonathan’s care at MPTC. Its convenient proximity to Johns Hopkins came in handy when baby Elizabeth made her debut at 3 a.m. while Jonathan had radiation at 9 a.m. the same day. Today, Jonathan is making remarkable developmental progress, although the impact of the tumor and radiation effects are still evident.

Josh has been deployed in the Middle East and is home at Ft. Meade as of January 2020. The military has covered the treatment for both William and Jonathan.

The odds of having two survivors with two genetically and environmentally unrelated cancers is quite literally one in a billion. Elizabeth, now two, takes pride in helping her older brothers.
The family believes that “the little redhead, Elizabeth, will end up winning the Nobel Prize for pediatric cancer research.” In the meantime, the research conducted by those funded by the Children’s Cancer Foundation, Inc. will pave the way for Elizabeth.

Dr. Brown and Dr. Kwok both serve on the CCF Scientific Advisory Board. Dr. Rubens received the 2017 CCF Giant Food NextGen Award to fund his research in brain tumors. 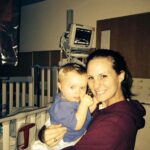 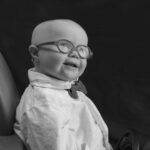 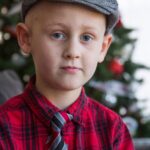 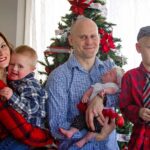 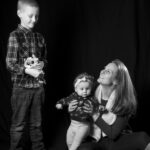 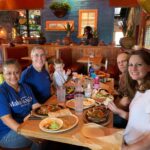