To honor Harley Parkes, a long time teacher and coach at Harford Christian School, who passed away in 2013 from a long time battle with multiple cancers, his family has started a scholarship in his name and the school has a soccer tournament every year named the Harley Parkes Memorial Soccer Game. This year, The Children’s Cancer Foundation was the beneficiary of the soccer tournament.

Harley Parkes was a teacher and a coach for 30 years. He was named coach of the year for Harford County and the field that he built for the school and maintained was voted as the best outdoor field and is now named “Parkes Field” in his memory. He won over 27 championship titles, coached both boys and girls soccer and over 450 players.

Past players, coached by Harley came to play at Parkes Field on May 28, 2016 and raised over $1,000 for CCF.
Sean Parkes, Harley’s son, came to the CCF offices on June 10 to present the check.

CCF is grateful for the generosity of Sean and his family. 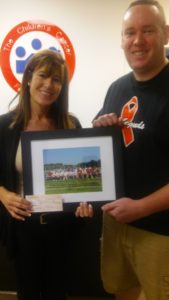